Villages by the Coquet 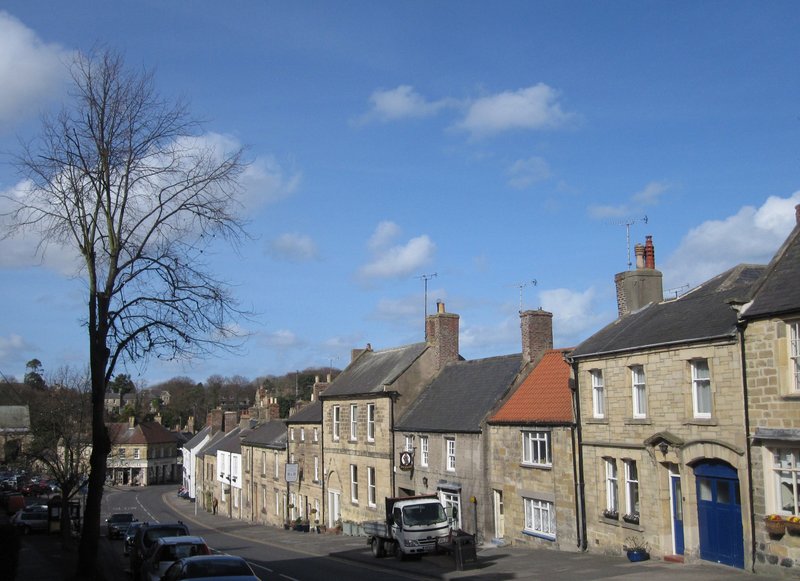 I think Warkworth is one of the most attractive villages in Northumberland, with its long main street dominated at one end by an impressive castle and at the other crossing the pretty River Coquet in the shadow of the spire of St Lawrence. There are traditional pubs and tea-shops, some interesting shops and a pleasant walk to the sea.

The village is almost completely contained within a loop of the river – it is almost like being on an island. Built in the local honey-coloured stone it is a pretty sight as you look down from the top (near the castle), although parked cars somewhat mar the view. 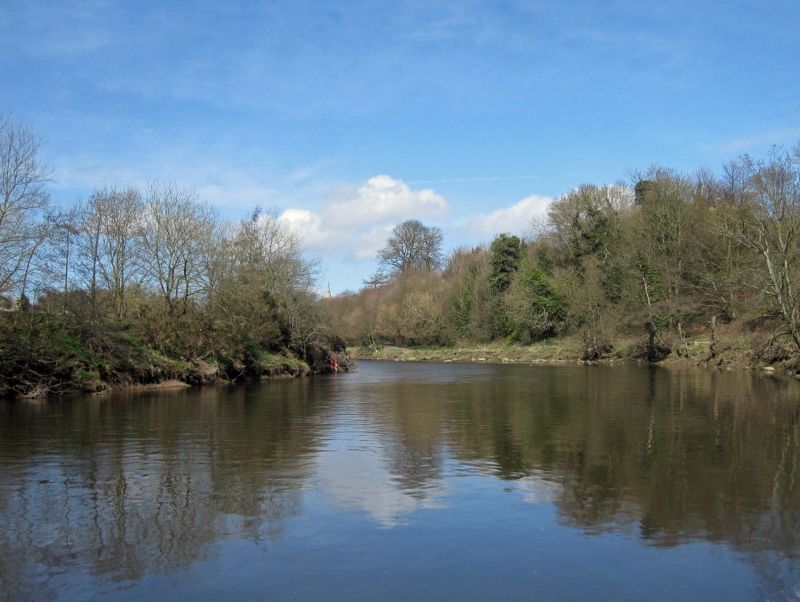 The River Coquet in Warkworth 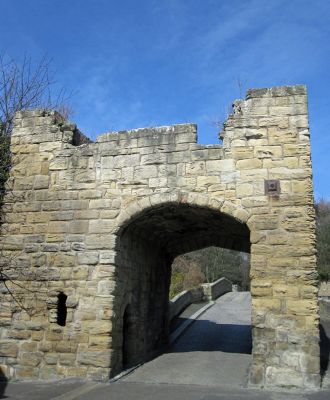 At the foot of the main street the river is crossed by an ancient bridge with a fortified gateway. A plaque on the bridge reads:

‘This XIV century fortified bridge over the River Coquet has carried all traffic for almost 600 years and replaced an earlier stone arched bridge on the same site. The bridge and the tower are scheduled as ancient monuments.

The new bridge was built by Northumberland County Council and opened on the 8th May 1965 by Alderman D Dawson O.B.E., chairman of the Highways Committee’

The new bridge mentioned in the plaque today carries all road traffic, but it’s still possible to walk across the old bridge. From here you can get some lovely views of the river and the village beyond. 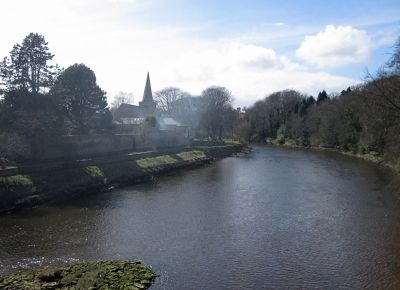 View from the bridge

Nearby is the village church, dedicated to St Lawrence, which you can see in my photo of the view from the bridge, below.

This dates back to Norman times, having been built in the 12th century on the site of an earlier wooden Anglo Saxon church which is thought to have been destroyed by Viking raids in 875 AD. Perhaps partly because of this the Normans built their church to serve not only as a place of worship but also of shelter, providing sanctuary for the villagers in times of danger. It has very thick walls, with very narrow high windows to keep out the enemy.

Sadly, however, this didn’t prevent the deaths of 300 inhabitants who took refuge here when Donnchad II, Earl of Fife entered Warkworth in 1174 and set fire to the town.

The spire and belfry below it were added in the 14th century and the porch in the 15th. 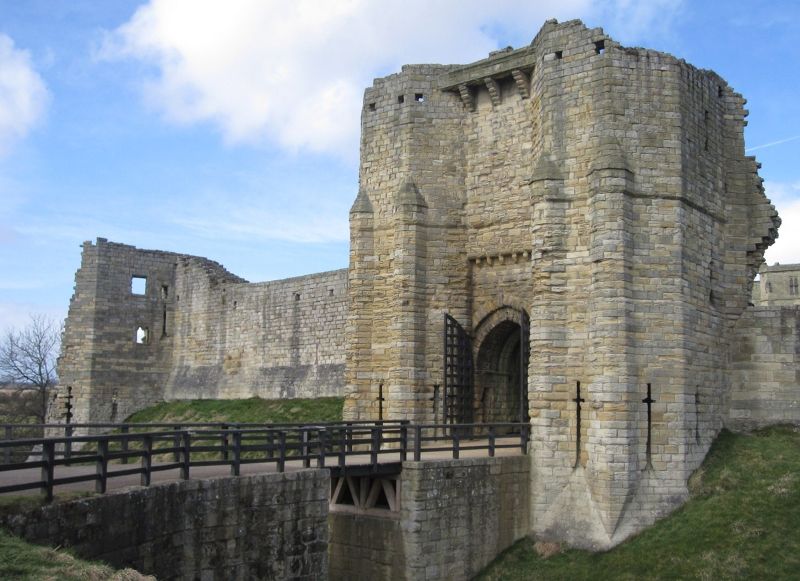 The origins of Warkworth Castle are a little uncertain. Traditionally its construction has been ascribed to Prince Henry of Scotland in the mid 12th century, but it may have been built by King Henry II of England when he took control of England's northern counties a little later in the same century. In the 14th century it came into the hands of the eminent local family, the Percys, at first Barons and later Earls of Northumberland. It was the first Earl who commissioned the building of the castle keep. 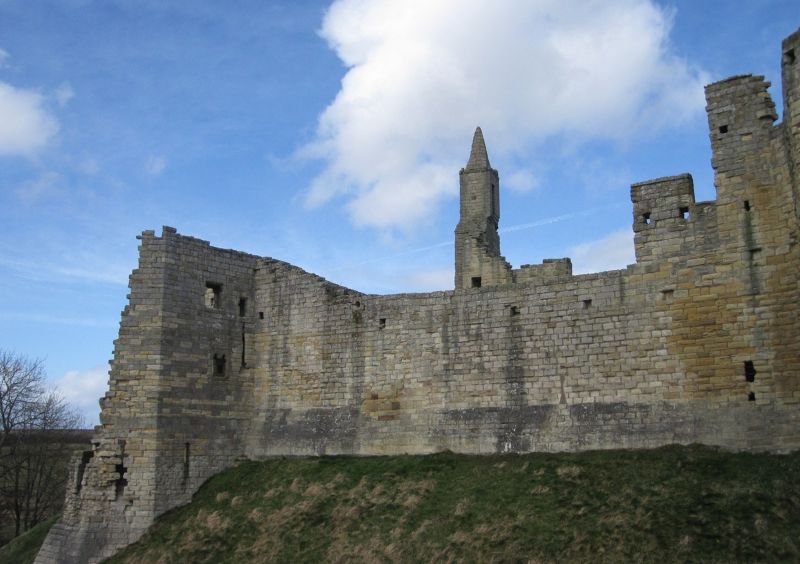 The castle has played its part in English history. During the Wars of the Roses the Percys supported the Lancastrian cause and for a while, under King Edward IV, Warkworth was confiscated, although he later relented and restored it to them. The castle formed the backdrop for several scenes in William Shakespeare's Henry IV, Part 1 and Part 2. Later it came under royal control again, under Elizabeth I, because of the part the Catholic Percys played in the northern rebellion against her. Again it was restored to the family, but after the failed Gunpowder Plot of 1605, the 9th Earl was imprisoned for his connection with Thomas Percy, one of the plotters. With the unification of England and Scotland under a single ruler, James I, the Earls of Northumberland had no need for two great castles near the border and maintained Alnwick at the expense of Warkworth, which gradually fell into ruin.

The last Percy Earl died in 1670. In the mid 18th century Hugh Smithson married the indirect Percy heiress. He adopted the name ‘Percy’ and founded the dynasty of the Dukes of Northumberland, through whom possession of the castle descended. But it was never fully restored, despite some efforts to repair the keep. Today the castle is under the care of English Heritage and is open to the public. 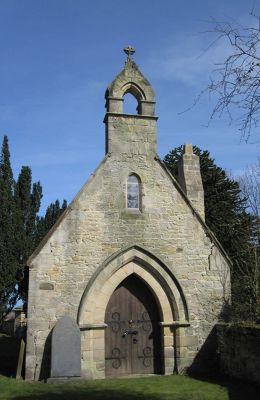 Chapel by the path to the sea

If you cross the Coquet at the foot of the main street (whether by car on the new bridge or on foot via the old one) you will see a lane leading off to the right. A short drive along here is the car park for the beach, but it’s just as easy to walk from the village. You will pass the attractive cemetery chapel which dates from the mid 19th century and reminded me of Welsh chapels – I later read that its roof is of Welsh slate. Just beyond this is the long stay car park and from here you need to continue on foot unless you are heading for the caravan park that lies behind the dunes or the golf course.

If on foot it will take you about 15 minutes to reach the sea from the bridge. The lane dwindles to a path which leads over the sandy dunes to a wide beach from which you have views across to Coquet Island with its lighthouse. This island is protected as a bird reserve and can’t be visited, although boat trips from Amble encircle the shore and are popular especially during the puffins’ nesting season. 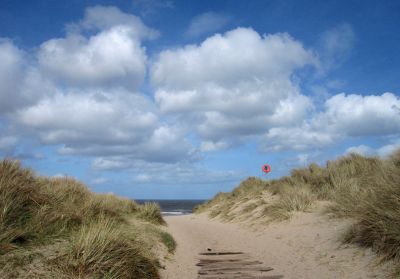 Path through the dunes 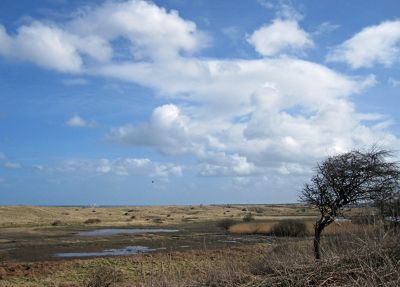 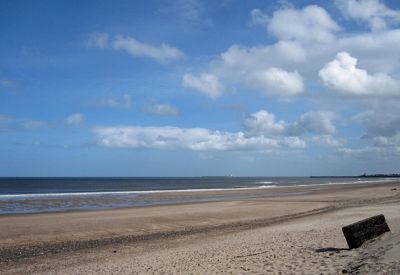 Warkworth beach, looking south
(you can see Coquet Island on the horizon)

Just downstream from Warkworth, at the mouth of the River Coquet, lies Amble. This is the base for boat trips to Coquet Island (although as I mentioned above, you aren’t able to land on the island). It has a fair-sized marina tucked into the shelter provided by the river’s estuary so is popular with the boating fraternity. 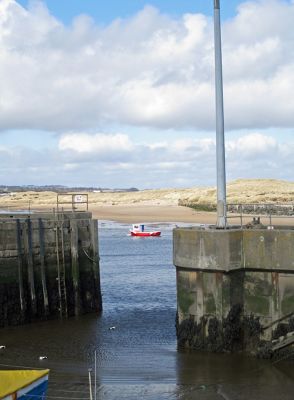 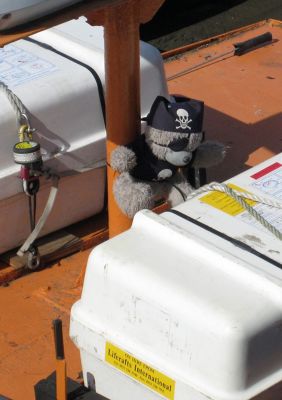 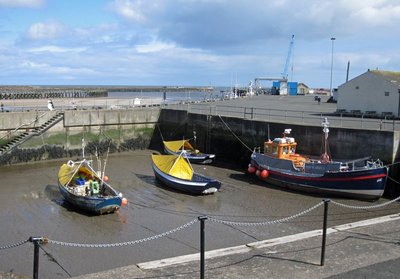 In the past Amble served as a port for the export of coal from nearby collieries but its harbour was never large enough to compete with rivals along the coast. Sea-fishing and shop-building or repairs also supported the local economy, and both of these continue to some extent today, although the main focus is on boating and tourism. 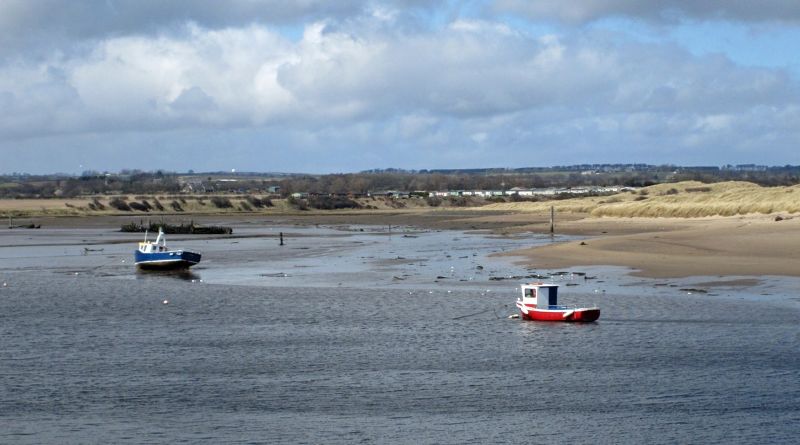 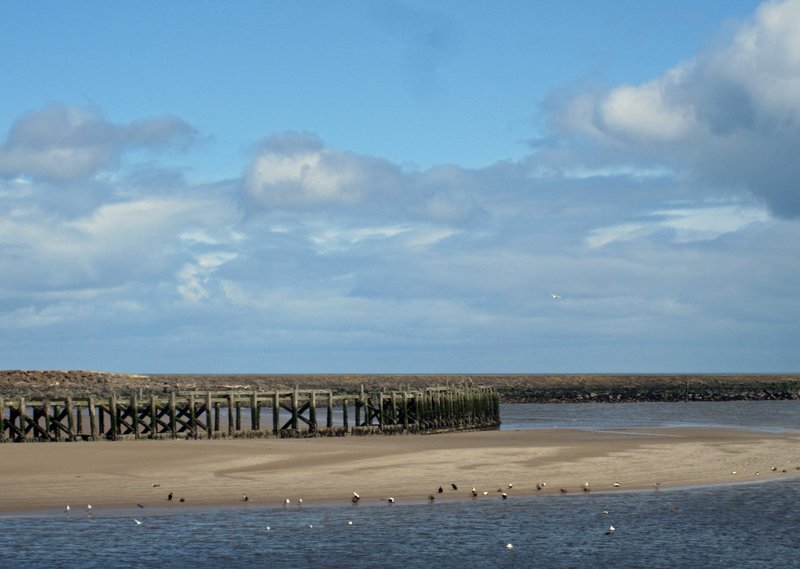 The Coquet estuary in Amble

It’s a nice place to stop for a walk if driving in these parts, with fine views of the river and Warkworth Castle beyond, several pubs offering refreshment and local award-winning ice cream makers Spurelli.

The estuary with Warkworth Castle in the background

Previous Next Table of contents

Lovely to see all those blue skies.

Thanks Irene. These photos were taken in April a couple of years ago, when we were clearly having a much better spring than we have this year

Was that a pirate bear?

Lots of history and great views to be had here. Nicely done, Sarah!

Thanks Sylvia, and lol @ Sally

Comments on this blog entry are now closed to non-Travellerspoint members. You can still leave a comment if you are a member of Travellerspoint.

If you aren't a member of Travellerspoint yet, you can join for free.